ESL One Cologne 2018 was a tournament that was full of surprises throughout. The group stages, held in the ESL studios, delivered plenty of drama and surprises. By the time we got to the LANXESS Arena, the legendary Cathedral of Counter-Strike, the complexion of the playoffs was rather different than expected. The playoffs eventually ended with Na`Vi shockingly punting Astralis into touch in the Semi-final and BIG doing the same to a bewildered FaZe Clan. Against all predictions, the Grand Final was contested between Na`Vi and BIG. For once the expert predictions were proven right in the final as Natus Vincere disposed of hometown heroes BIG 3 – 1. 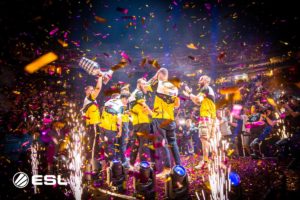 For the full story go read my group stage and playoffs wraps over on GINX. Without further ado, let’s look back at storyline that the Counter-Strike world perhaps didn’t take too much notice of during ESL One Cologne 2018. Amidst the BIG cinderella story and Na`Vi triumph, a thing or two perhaps went unnoticed.

G2 are not terrible

Far from it in fact. They defied expectations. More than that, it showed that the tactical leadership of Kevin “Ex6TenZ” Droolans is still as astute as it was back in Titan in 2015 or in VeryGames prior to that. After being in the wilderness of the French scene for past few years at LDLC, his return to tier one competition didn’t go so well in Belo Horizonte. That was with essentially no practice. In Cologne, after having a few weeks to prepare, the team look well-drilled and had some great tactical variety. Ex6TenZ seems to know the secret cheat code to unlocking the best from star AWPer Kenny “kennyS” Schrub.

It almost felt like we were watching Titan-era kennyS at times. He had a terrific performance in Cologne, finishing with a 1.23 HLTV rating despite their 16 – 1 loss to BIG in the Quarter-final. That’s his highest personal rating since IEM Oakland in November 2017. They still lack a little in firepower and managed to have a good run despite Richard “shox”Papillon not quite hitting vintage form after his surgery. If he does, G2 could be a real threat in tournaments on a consistent basis.