The fifth season of FACEIT’s Esports Championship Series (ECS) league came to its conclusion over the weekend. At a packed SSE Arena in Wembley, London, eight teams did their level best to claim the sizeable $250,000 first prize. The overall $660,000 prize pool is one of the richest for a league on the international CS:GO calendar. As it turns out, having YouTube as a primary sponsor means your tournament has no shortage of money. Thankfully, from a CS:GO perspective, ECS Season Five also had no shortage of action and drama on the servers. Counter-Strike’s biggest tournaments seldom fail to deliver an entertaining spectacle.

The group seedings for ECS seemed rather lopsided. Some would call it downright broken. Group A was incredibly stacked with all of Astralis, Team Liquid, fnatic and Cloud 9 crammed together. Astralis are undoubtedly the world’s current best team, with Team Liquid being one of their closest competitors. Both IEM Katowice winners fnatic and Boston Major champions Cloud 9 can also be dangerous on their day. 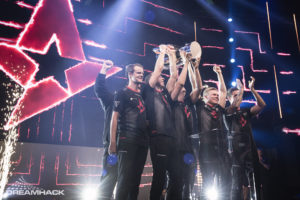 Group B by contrast seemed a little lightweight. Luminosity were clearly the weakest team, while the newly revamped G2 Esports lineup would need some time to find their feet. FaZe Clan had only just swapped the fnatic-bound Richard “Xzist” Landström for interim substitute Jørgen “cromen” Robertsen. While usually a sure bet for a deep run in tournaments, this lineup hadn’t had any time together, leaving FaZe as something of an unknown quantity. NRG had looked impressive online all season and came into the finals with a good result after making the final of Starseries Season Five. Would that translate to a LAN with teams like Astralis and Liquid in attendance?

Read the full article in all of it’s considerable and lengthy glory here.