There’s been a veritable flurry of excitement surrounding the entry of FACEIT into South Africa through the Souzern Lions league. With such a announcement dropping it would be easy to forget it’s still business as usual in the competitive CS:GO scene. VS Gaming’s Masters Leg 3 will be starting next week, while ESEA’s upcoming season has already kicked off. Look out for a preview of the VS Masters Leg 3 later this week. For now, let’s turn our eyes towards ESEA Open South Africa Season 28.

Energy managed to dominate the ESEA Open Season 27 last time around and walked away with the title with relative ease. Will anyone be able to challenge them this season? We’ve seen the inevitable postseason roster shuffles and lineup changes and it would appear that the opposition is gearing up to take the fight to the incumbent champions. Energy are deservedly the overwhelming favourites and Gareth “MisteM” Ries only makes them more terrifying a proposition. I strongly favour Energy for the title, but it’s slightly less likely to be an open and shut case like last season. 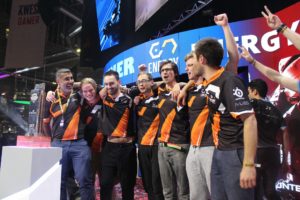 The vanquishers of the depleted Energy squad in Season 26, Big 5 chose to sit out Season 27 to focus on VS Masters. While they have maintained their position there or thereabouts in the top three of South African CS:GO, their previous upward trajectory seemed to stall out. We started to see them labouring to beat lesser opponents and not being as dominant over Goliath Gaming as they had been in the past.

In the interim, they’ve lost their coach James “zerOch4Nce” Wijnberg to Sinister5, where he is looking to revive his playing career. I don’t think that will affect them much, but it is concerning that even a revered tactical mind like zerOch4Nce couldn’t help the team find tangible improvements. They are a good team. Let’s hope they get back to what they do best, which was being the closest rivals to Energy. To do that they will need to start winning consistently against Goliath. I’d bet on them being likely third place finishers.